What differences are there, if any, between the training of a recreational and elite lifter? A new app feature in version 8.6 helps us quickly spots some differences. 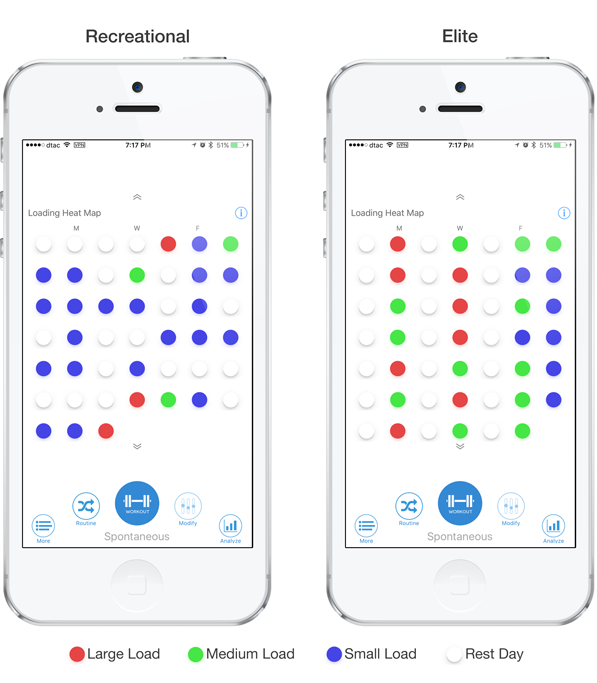 Note: the load is measured using exertion load. What differences can you see? First of all, the

What differences can you see? First of all, the elite lifter obviously follows a regular schedule. He lifts on Mondays, Wednesdays, Fridays, and Saturdays. The hardest days are on Mondays and Wednesdays, with a rest day preceding and following each. Fridays are typically medium and Saturdays are usually easy. That makes sense considering those are the only two back-to-back workout days of the week.

Contrast that with the recreational lifter, who has no apparent workout schedule. It starts off with four rest days in a row followed by five consecutive workout days. Overall, the recreational lifter and the elite lifter have the same number of training days over the same period. It would seem then that they are both equally motivated. However, the clustering of several workout days in a row most likely contributes to the over-representation of small load days. Without adequate recovery between sessions, there just isn’t enough gas in the tank to go hard. And without those hard days, progress will stagnate, as indeed it has for the recreational lifter in this case study. Meanwhile, the elite lifter has consistently improved his results on a regular basis.

Sometimes you have to train smarter before you can train harder.