Hardgainer: someone who accumulates lean mass at a rate below average | I’m just a hardgainer with bad genes.

You’re doing all you can but somehow everyone else seems to be doing better. It must be genetic since what else could be slowing down your gainz, right? Well, let’s break it down. The three determinants of hypertrophy are:

That’s it. People like to overcomplicate the whole thing but that’s really all there is to it. The good news is that the first two factors are entirely under your control. The bad news is that leaves a lot of room for human error. But how much control does that actually give you anyway? For the sake of argument let’s say that gives you control over 2/3 of the hypertrophy pie. Following from there, someone meeting the definition of a hardgainer is most likely carrying around that title due to some sort of mismanagement of diet and exercise, since the majority of the hypertrophy response is under their control. So far, nurture is coming out on top. More on that later.

Okay, we’ve still got the last factor to think about — interactions of diet and exercise with one’s genotype. Let’s try a thought exercise. Picture the classic hardgainer in your mind. Got an image? The most common association with the hardgainer is a slightly built frame with low body fat. That would probably be your first thought when asked about the typical hardgainer. But is that really true? Yes, but only partially.

Let’s look at the data

The first thing to examine is how valid our image of the hardgainer really is.

Assumption: a hardgainer has a small frame with low body fat.

There is indeed an association between a small frame and lower body fat, albeit a weak one. And whatever there is may be due to systematic error in measuring wrist circumference at different body fat levels. Moreover, notice that more people with a smaller frame size are above 15% fat than below 15% fat. It appears that it is more common for people with a slightly built frame to have average to above average body fat levels.

Assumption: a hardgainer has a small frame .

Moving on, our definition of the hardgainer is someone who gains at a below average rate, while our image of one is now someone with a small frame. Let’s examine the relationship between lean mass and frame size directly to see if that holds up.

It does appear that lower muscle mass is associated with a smaller frame size. Not only that, but it’s a moderately strong association as well. In fact, what we see here is that 39% of all variation in muscle mass, between these samples, is explained solely by their wrist/height ratio, which is not something they — nor you — can do anything about.

Just a few paragraphs ago, we assumed for the sake of convenience that you had control over 2/3 of the determinants of hypertrophy and genetics took the remaining 1/3. It turns out that this crude assumption was not too bad. The wrist/height relationship appears to establish a floor for the genetic component just above 1/3. If you’re keeping score that means the nurture side of the argument is still coming out on top.

This is not really all that surprising by the way. Wide shoulders and robust elbow, wrist, and knee joints have shown a relation to larger amounts of muscle before (Chumlea, Wisemandle, Guo, & Siervogel, 2002). Interestingly, the same study also showed larger knees and hips were associated with greater body fat. Keep in mind the authors measured bone diameters, not the distance around the hips.

Since we dug into the data a bit and managed to tentatively quantify the nature (39%) and nurture (61%) sides of the argument, we might as well keep going. Let’s take two guys from either side of the wrist/height spectrum as concrete examples and see how life in the weight room unfolds for each of them as they pursue a common dream. Let’s further assume that both have been training for 1 year and have been consistent in hitting their macros. The only real difference between the two is their frame size. 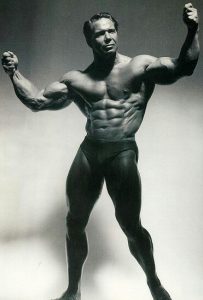 Both A and B (can we just call them Andy and Bob?) are aiming for that classic bodybuilder look embodied by Bill Pearl, who had an estimated FFMI of 25.8.

Andy walks around with a 20.2 FFMI. He’s squarely on the hardgainer side of the spectrum. He goes to the gym and does his thing. However, he’s got a long way to go. Only 1 in 100 guys like Andy reach that FFMI goal. Our guy here may be the one, or maybe not.

But here’s the real deal. Why did that one guy make it? Don’t say it was genetics because it clearly wasn’t. We started with the assumption that he was dealt a bad hand and guess what, it didn’t matter. It didn’t matter for Frank Zane either. His small frame actually made him look more aesthetic.

Well, what about the other 99 who didn’t reach 25.8? The wrist/height ratio only accounts for about 1/3 of the variability in FFMI. That still leaves a lot of room for reasons other than the genetic argument as to why those 99 didn’t make it.

The bottom line is once again in the numbers. One the one hand, 99 hardgainers won’t make it and on the other hand, 92 easygainers won’t make it either. From that perspective, it doesn’t look like genetics matters a whole lot. The takeaway here is to stop worrying about it. Concentrate instead on what appears to be a whole lot left on the table.

So what is still on the table? Diet and exercise, or more specifically, the management of each. Keep this in mind: If you track it, you can manage it.